Are you one of the many grandparents offering a helping hand during the long school holidays? Well you are not alone, it seems that grandparents are increasingly taking the strain and looking after grandchildren this summer. According to recent research from Saga Motor Insurance more than two thirds (68%) of grandparents will look after their grandchildren at least once over the holidays. The study also found that

But what is the cost of this support?

99% of grandparents do not get paid for the childcare they provide and presumably wouldn’t dream of doing so, but with the average childcare cost for 3 days a week sitting at over £100, it’s clear that grandparents are saving a fortune for their own children.

It’s not just the care that devoted grandparents provide for nothing. On average they will spend £82 looking after their grandchildren during the holidays, Saga estimates that this means a total spend amongst grandparents of more than £300m. One in seven plan to spend more than £150 and once again this is something that 99% of grandparents do because they want to and do not get reimbursed.

As a very grateful recipient of such amazing support from my parents, I constantly feel guilty that I am causing them a huge burden. However, I’m clearly reminded that this is something they enjoy doing. My parents reaffirmed the Saga report findings saying that offering to look after grandchildren over the holidays gives them an excuse to spend quality time together, and taking them out and treating them is simply the icing on the cake. So whilst the support Grandparents provide, helps grateful children like myself financially, it also benefits them too. As you can see from the picture of my daughter and her cousin being treated to a day at Sundown Park by their Grandparents yesterday its smiles all round! 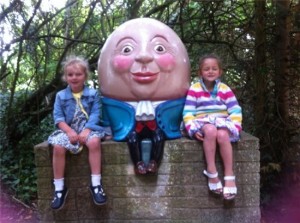