UK house prices have risen to a new peak, surpassing the previous highest back in 2007.

That’s according to the Nationwide – after prices climbed 1% in June and were up 11.8% from a year earlier.

However, despite the acceleration in house prices, the building society said there was “significant variation” across the country.

However, the Nationwide says it expects price gains to slow in the capital from July onwards.

The building society based this view on “anecdotal evidence” from surveyors and estate agents.

The annual rise in house prices accelerated from 11.1% in May to 11.8% in June, with all regions across the UK seeing an increase.

Prices increased by 1% in June, compared with a 0.7% rise in May. This was the 14th successive monthly increase in prices.

The figures are based on the Nationwide’s own mortgage data.

Other surveys in recent months have echoed the view of local markets moving at a different pace. The Land Registry said last week that prices were still falling in some areas of Wales and the North West of England.

The south of England continues to see the strongest growth in house prices, various surveys have said.

The Nationwide said London saw the sharpest rise, with prices up almost 26% in the three months to the end of June compared with the same period last year. This pushed them 30% above their 2007 peak. 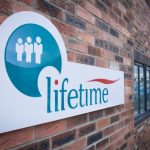 Alas Smith and Bottomley; Lifetime’s take on the tricky subject of Auto Enrolment!