Young people are on course to be poorer than their parents at every stage of their lives, according to a new report.

The study, carried out by the Institute for Fiscal Studies (IFS),  says the slow rate of growth in overall wealth suggested that young people would lag behind earlier generations.

The study did point out that households had actually grown richer during the financial crisis – but it said that the reason for the growth between 2006 and 2012 was the increase in pension values over the period.

Households aged between 45-54 saw the biggest increases in their pension wealth which rose on average by £38,000 over the period.

Dave Innes, a research economist at the IFS and an author of the report said: “Despite the financial crisis, household wealth on average increased in real terms over the late 2000s, driven by increases in private pension entitlements.

“Even with these increases in average wealth, working-age households are at risk of being less wealthy at each age than those born a decade earlier.”

The IFS study also looked at people’s attitude towards saving and pensions.

Among households aged 25-34, nearly one-quarter (24%) did not expect to receive any income from the state pension in retirement.

However, one third expected it would be their largest source of income after retirement.

Despite new legislation that ‘automatically enrols’ workers into workplace pension schemes, the IFS report stated that nearly half (44%) of people did not expect to receive any income from a private pension.

Rowena Crawford, a Senior Research Economist at the IFS and another author of the report, said: “It is striking how many individuals do not expect private pensions to have a role in financing their retirement, let alone be their main source of income. It will be interesting to see how these attitudes change as auto enrolment into workplace pensions is rolled out.” 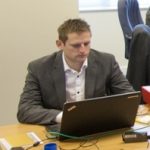 All seems a long way from my quiet garage in 2004!

Topping up the state pension