A member of the Lifetime admin staff is helping raise awareness of a Barnsley man’s ‘Chance for Life’ appeal.

Lifetime office administrator Scott Kershaw is supporting the appeal made by the family and friends of Daniel Moxon, who suffers from leukaemia and has been giving, at the most, just months to live.

Daniel (pictured below) was diagnosed with leukaemia three years ago – at the age of just 23 – and underwent chemotherapy as well as having a bone marrow transplant.

Although he wasn’t given the all-clear at that time, he was told that a relapse was ‘unlikely’. 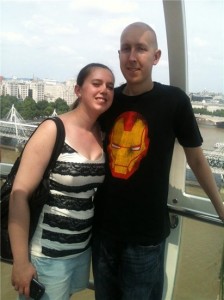 But now the leukaemia has returned – and Daniel’s family and friends are now frantically trying to raise funds in order to find alternative treatments and have the cash to pay for them.

A statement from his family said: “Earlier this year Daniel noticed bruising on his body and was told that the disease had returned. He was initially placed on a new drug but after this resulted in nerve damage he then underwent more chemotherapy. While that eased the spread of the disease it did not eradicate it, and Daniel was told that nothing further could be done.

“The Royal Marsden, a special cancer hospital in London, has a treatment that may be able to help Daniel but the funding may not be available on the NHS. The doctor has told Daniel that it was ‘time to stop fighting’. Dan’s brave view is that ‘it is time to fight harder than before!’

“We are looking at a place in Texas, but a consultation alone would cost £22,337. By the time we raise enough money for that it may be too late, but if the Royal Marsden can’t cure him they may be able to give us enough time to raise the money to go to Texas.

“Please be kind enough to make a donation, no matter how large or small. We are all extremely desperate to save Daniel’s life – and don’t want to lose this courageous, kind and remarkably strong person from our lives.”

And donations can also be made via Facebook, by going to www.facebook.com/LeukaemiaLymphomaHub and clicking on the pypal make a donation button at the top.

Children continue to miss out on benefits of tax-free savings