Robert, who is mainly based at our Driffield office in East Yorkshire, was keen to get a snapshot of client Samantha Barlow and the British Empire Medal she was given by the Queen (see picture below). 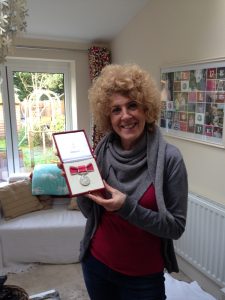 Mrs Barlow, of Cottingham near Hull, was awarded the BEM medal (in the honours list announced at the beginning of this year) for services to health and fitness in East Yorkshire.

She formed the charity venture ‘Fitmums & Friends’ – after five mothers responded to an invite in school book-bags to meet her for a run.

From that small beginning, ‘Fitmums & Friends’ has grown into eight groups and over 600 members, of all ages, from Hull in East Yorkshire to South and North Yorkshire. Friendship and camaraderie play a big part, as well as the enthusiasm to boost fitness.

Said Sam: “I was very honoured and proud to receive the BEM medal. The Fitmums and Friends has really grown and a lot of people are getting real benefit from it, which is great to see.”

And of ‘photo opportunist’ Robert, Mrs Barlow added: “Both my husband and I are very grateful to Robert for his financial advice. He has been very helpful and we always enjoy seeing him!” 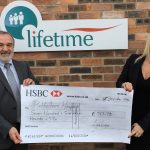 Joint venture opportunity backed up by glowing testimonial from accountants