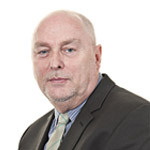 My disc selection reflects the musical memories throughout my life. Music which immediately evokes significant memories of my journey.

I was brought up at a time when the British music industry and artists were not that influential or inspirational. I was a child of Rodgers and Hammerstein show tunes; post war big dance bands; Radio Luxemburg; pirate stations like Radio Caroline; and American artists and music dominating the airways.

Disc One: This was the first musical influence I remember, 1939 – Glen Miller – Moonlight Serenade.

Although not quite this old, however this band leader’s music was frequently played by my parents throughout my early and immediate post war years. This signature tune was among the most recognisable of all his music as it was used to introduce his BBC radio shows – compulsory listening in my early years. Sadly, Glenn Miller disappeared without trace after boarding a plane on December 15th 1944 to get him home to his wife and children for Christmas. He remains “missing in action” to this day.

Disc two: American music was a great influence in my early years, so this second American artist should come as no surprise, 1962 – Marcie Blane – Bobby’s Girl.

American music was a great influence in my early years, so this second American artist should come as no surprise. Apart from the obvious, this was the very first record I bought with my own money. It was an American label and American artist. A song shortly covered in this country by Susan Maughan, but it never had the same meaning or effect for me that the original Marcie Blane version had.

Disc three evokes great memories of my parents and the musical influences they brought to my life. This record was discovered by me during a clear-out of the loft in my parents’ house. Along with numerous other records unearthed were two 78 versions of film soundtracks – one  for the 1941 film ‘Dangerous Moonlight’ (Warsaw Concerto) and another 78, which proved to be a distinct classical favourite of mine, ‘The Legend of the Glass Mountain’ – a very powerful and evocative piece of music from the 1950s film ‘The Glass Mountain’ starring one of Mum’s favourite actors, Michael Denison. Although I didn’t have the equipment to play the original 78 records I did later discover a Mantovani LP version of both pieces and Dad played it constantly. Every time I hear the music I can’t help but recall the magic of discovering the original treasures unearthed from that loft.

Roy Orbison was such a tremendous influence on numbers of other artists on both sides of the pond. I just enjoyed his music and have chosen this particular song simply because it was one of his most successful in both the American and British charts and possibly remains one of the most recognised popular songs of all time. Given his life was dogged with tragedy, losing his beloved wife in a car crash and later his two children in a house fire, I find it of immense personal strength he was able to carry on producing music of sheer excellence for years afterwards.

Disc five: 1964 – Time is on my side – The Rolling Stones. This takes me straight back to the start of my time studying at Art and Design in the late 1960’s when being “cool” was mandatory! I was fortunate enough during my time in London to be living in digs next to Bill Wyman’s mum’s house, consequently I occasionally witnessed visits from some of the most fashionable people in the music industry – The Rolling Stones. Brian Jones and Charlie Watts were particularly influential in respect of my own wardrobe items at the time. Yes – pink cord trousers and all…..!! Later, employed by the Rank Organisation I was fortunate enough to meet the band and have never felt so out of place in my life! Their “cool” was really on another planet. This particular song has a very powerful beat and epitomises their early catalogue. It also clearly demonstrates, through his guitar work, just how talented Brian Jones was – brilliant.

It would be wrong not to include something connected to The Beatles because they are such a huge influence on various aspects of music and artists during my life, but, for me The Beatles was only one person, John Lennon, the founder of the group. I believe this particular piece of song writing is possible one of his greatest achievements. Listen closely to the words and you can immediately appreciate why so many cultures have found this evocative, challenging and meaningful. His death at the age of 40 by the hand of Mark David Chapman on 8th December 1980 was possibly more of a shock and loss to the music industry than the death of Elvis Presley 3 years earlier aged 42.

My most influenced years were covered by a number of types of music – Motown and the Philadelphia sound in particular. For me it would be impossible to single out a special Motown hit as significantly important because I loved this period of music where the “wall of sound” was dominant wherever you went clubbing. However, one particular record does have a great memory attached to it …..

Disc seven: 1975 – This Old Heart of Mine – The Isley Brothers. Great dance tune!

The one and only time I have blacked up and dressed up as a pop artist. Along with two colleagues we accepted the dare at a Rank Leisure Christmas party event to imitate members of the group. The venue was the Gaumont Theatre, Doncaster, following the end of a very successful live show run. Yes, alcohol was involved and yes it did involve the full dress regalia and make-up. The whole impersonation was so good my wife never recognised me throughout the whole of the performance! My time with Rank was “full on” every day, especially in London at the Premier Theatre, the Leicester Square Odeon, and I had the honour to meet some very talented and significant actors and artists from all over the world.

And so to the final event ….. Disc eight. This choice has been particularly difficult for me because I have reached the last of eight and yet there are so many songs and pieces of music I would have loved to have included but couldn’t.

Disc eight: When You Wish Upon A Star – a Disney song from the animated film ‘Pinocchio’.

This song recalls the birth of my son James and daughter Stephanie. We still have a music box that plays this tune and I used to softly “try” and sing the words to get each of them to sleep. Sometimes it worked and sometimes it didn’t, but I have never managed to get the song out of my mind as a result.

Choice of book: War of the Worlds, by  H.G. Wells. 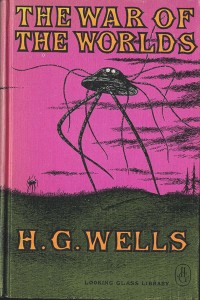 The work, written in the first person narrative, details the journey of an unnamed lead character and his younger brother in the South of England, at a time when Earth is invaded by aliens (Martians).  It remains one of the earliest stories detailing a conflict between mankind and alien forces and is one of the most commented-on works in science fiction.

All the aliens are eventually killed by an onslaught of earthly microbial infections to which they have no immunity: “slain, after all man’s devices had failed, by the humblest things that God, in his wisdom, has put upon this earth”.

This work by H.G. Wells both enthralled and terrified me, largely due to the fact it was so well written and so believable as a result of how and where it has been presented. I have never tired of reading this work and although Hollywood has done its best to interpret the story, nothing can replace the images conjured up in ones imagination as the main character goes through incredible horrors in his attempts to survive this alien onslaught. The power of presentation and imagination actually brought sheer panic to elements of Boston, America when Orson Welles turned the original story into a radio program and duly broadcast it as an actual happening event in backland America. It is a story of pure survival and determination by mankind and a book I would recommend to everyone.

Sound has always played a huge part in my life, if only because when I was a child the television had not long been invented and was not available to purchase. All I had for entertainment was the radio – and my imagination, and I made good use of both. So….! My luxury item would be a wind-up radio that would still be capable of keeping me in touch with world affairs, feed my imagination, and in doing so, probably keep me sane. 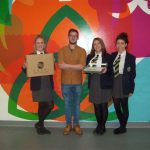