Lifetime gets a hole in one!

Home / Community News / Lifetime gets a hole in one!

Lifetime gets a hole in one!

Lifetime was last night honoured with a visit from an up and coming sporting star!

He is a 12-year-old from Barnsley, called George Nicholson, whose rise to success as a golfer is already very much on course. 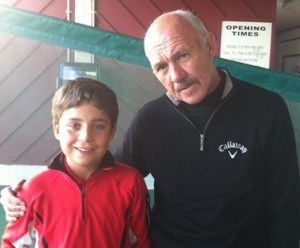 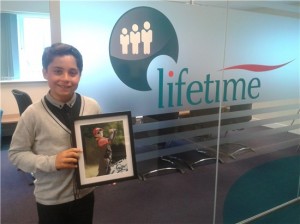 Above: George pictured with Pete Cowen who runs the golf academy which George attends, and also George presenting Lifetime with a signed copy of a picture of him in action.

George has won over 60 competitions both locally and nationally and as you can see from the photos George does get lots of media coverage and due to him being coached at the Pete Cowan golf Academy he comes into contact with World class golfers such as Lee Westwood, Thomas Bjorn, Louis Oosthuizen and Henrik Stenson. He is also a member of the Nike academy Elite Squad at Oulton Hall. So he does “get around” in the junior golfing circles!

He has been a “model” for Direct golf who are the largest independent golf retailer in the country and is in all their stores in the country as well as being the face of Jaxx junior golf equipment. Probably the most exciting prospect is that he will be playing in both the European and World championships later this year in Scotland and Pinehurst in North Carolina.

……Are all you golfers green with envy yet??

George has been searching for the right company to back him on his campaign to international success and Lifetime have been chosen as the company with the qualities and professionalism he wishes to be associated with.

Ian Dickinson, Lifetime Managing Director, said: “He was a delight during his visit and certainly was not daunted by a room full of Lifetime staff asking questions. In fact he had many of us in stitches with his quick wit and cheeky smile. This alone will carry him a long way. Determined and confident he exudes all the qualities of a future star.”

Lifetime wish George all the success in the future and hope that this will be the first of many blogs we write about him as we track his golfing progress.

Exam season – Are you doing your revision?