Good news if you’re driving to a job with a median wage – less so if you’re receive a State Pension or other benefits.

It’s been a strange couple of years since Rishi Sunak took up the role of Chancellor of the Exchequer.  At first, many though he would just be a puppet for the Boris Johnson government, waiving through the Prime Minister’s spending plans.  But then along came the Covid-19 pandemic and we all came to see Rishi Sunak as a generous chancellor – whether he was supporting workers through the furlough scheme or treating us all to half-price meals under Eat Out to Help Out.

Fast forward to September last year and the chancellor had changed his tune – announcing a 1.25% increase in National Insurance (for the 2022/23 tax year) followed by the Health and Social Care Levy (also at 1.25% from the 2023/24 tax year onwards).  While the plan is for the money raised to be used in the NHS and care sector, this was still an unwelcome pinch in the pockets for those in work.

Wednesday’s Spring Statement (or mini-budget as it’s been called) has given us another chance to see whether Mr Sunak was a cost-cutter or a gift-giver.

The National Insurance Threshold has gone up

While the chancellor hasn’t bowed to pressure to delay his National Insurance hike, he has increased the level at which you will start to pay the tax from £9,880 up to £12,570.  Anyone earning less than £12,570 per year won’t pay any National Insurance contributions at all from July, when the new threshold comes in.  For anyone else, this represents a National Insurance Contributions cut of up to around £330 next year compared to what it could have been.  The actual amount you will save depends on your income and higher earners (above around £41,500) will still take home less pay in the tax year starting in April.

Is there anything you can do? Some employers allow their staff to use “Salary Exchange” or “Salary Sacrifice” to pay into their workplace pensions.  These can shave a little bit more off your National Insurance bill.  It’s not a straightforward decision, but your financial planner will be happy to discuss the pros and cons at your next meeting.

Rishi has tried to give us a gift at the petrol pumps by reducing fuel duty by 5p per litre.  Don’t get too excited though, depending on the size of your fuel tank you’re only likely to save between £2.50 and £3.80.  This isn’t likely to bring the cost of filling up back down to what it was only a few weeks ago, and filling station owners aren’t forced to pass on the saving.

A tax on a tax! After fuel duty has been added to the cost of a litre of petrol or diesel, VAT at 20% is added on top, in effect taxing the tax!  This means that Rishi Sunak’s 5p cut in fuel duty also shaves an extra penny of VAT per litre as well.

Income tax cut – but not yet

On the Income Tax front, the only thing we’ve had is a promise – that Basic Rate Income Tax will be reduced by 1% before the next election.  This would reduce Income Tax in the basic rate band from 20% to 19%, saving £377 based on the bands in force today.  However, we will have to wait and see whether this happens in April 2024.  Also, because the level at which you start to pay basic rate tax is frozen until 2026, this giveaway may not be as generous as it seems.

No change to State Pensions and benefits

It’s pretty clear that the measures outlined in this Spring Statement have favoured those in work over those who aren’t.  Benefits and State Pension will still only increase by 3.1%, despite the inflation figure (CPI) for February hitting 6.2%.  This means that pensioners and those receiving Universal Credit will find that their money doesn’t go as far as it used to.  However – we should probably bear in mind that the increases in National Insurance never hit those receiving State Pension in any case, as pension income doesn’t face this tax.

So, what’s the verdict?

For those in work or drivers, there has been some good news in this Spring Statement and it may seem like the chancellor is back in gift-giving mode.  However, if you’re on benefits or rely on the state pension you might be wondering when your present will arrive. 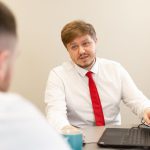 Is it time to speak to an adviser?

It is no joke, employees need help now