South Yorkshire teenager hoping to catch people in his net!

South Yorkshire teenager hoping to catch people in his net!

A South Yorkshire teenager with a social conscience is hoping to catch people in his net!

Alexi Karakaxas, son of Lifetime’s General Insurance Manager Tracy Ward, is determined to play a part in campaigning for social justice in the world – and in particular wants to highlight the planet’s hunger problems.

His ‘Caught In The Net’ initiative has joined forces with over 200 other organisations, under the ‘IF’ campaign umbrella, to raise awareness.

One of Alexi’s hard-hitting statistics is ‘that two million children die of hunger every year, four times the population of Sheffield’.

Alexi, 18, started his ‘Caught In The Net’ campaign at school, All Saints Catholic High, where he is a sixth- former.

He said: “We are the only school in Sheffield that is doing this sort of thing as a whole school event. Although it was started through sixth form it is very interesting that it has taken off throughout the school, with the first years also getting fully involved.”

Alexi earned rave reviews when he presented an inspirational presentation to an All Saints assembly (see picture below). 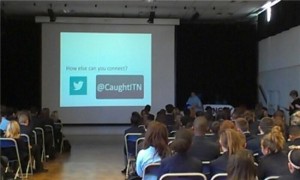 “It would be fantastic to see Caught In The Net develop into a full-scale charity campaign,” he went on.

“We are aiming to take ‘Caught In The Net’ down to London on June 8, where we will join with the other IF organisations for an event in Hyde Park. It is all part of our lobbying the G8 summit which is being held in Britain this year.”

The British Prime Minister David Cameron is chairing the summit, and will welcome the other leading nations. The IF organisations want to bring to their attention their main issues, which are:

Stop farms being forced off their land

Make sure governments keep their promises on aid

Alexi added: “There is an excellent IF video, which I have incorporated into my own power point presentation, which depicts the G8 leaders as children. The video cleverly puts world hunger at the centre of their discussions.

“I came up with the name Caught In The Net as a bit of a pun. Catching the G8 leaders in my net – and also the internet.

“I even dressed up as a fish (see below) when we delivered a ‘Hungry for Change’ initiative! 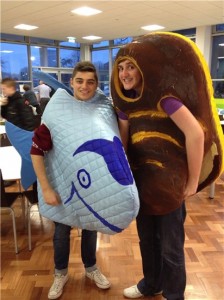 “You can follow us on twitter (@CaughtITN) and we will be doing video blogs as well. You can also purchase wrist-bands to show your support.

“By raising awareness through Caught In The Net and the whole IF campaign hopefully governments around the world will start to address world hunger on much more meaningful levels.”

Alexi is currently involved in exams – and plans to join the Royal Navy as a career.

But he hopes that he can leave a legacy.

“While the sixth formers at All Saints are currently leading the way with Caught In The Net, the year seven and eight pupils are also really interested and want to keep it going. That’s great news.”

Are you brave enough to ask the question?