The retirement age could rise by as much as six months per year according to the pensions minister Steve Webb.

Currently the average age of retirement is 64.7 years for men and 63.1 for women.

Now the Department for Work and Pensions are saying that, in its new business plan, it would like those average ages to rise on a regular basis.

Latest research says that the number of over 65s in England is expected to increase by 51 per cent over the next 20 years, and the numbers of those aged 85 and above will double by 2030.

Government ministers says that as a result of those increases there will be a big rise in the costs to the NHS, elderly care and state pensions systems.

Mr Webb said: “If someone works an extra year they can add 10 per cent to their pension for life. What we are doing is catching up with decades of longer living.

“We are living longer but the labour market and people’s retirement age has not been keeping up.”

Mr Webb added that the growing numbers of people living into their eighties and nineties would leave taxpayers with a rising bill and meant “the sums” would never add up if people continued to retire in their fifties.

The Chancellor of the Exchequer George Osborne announced earlier this year that increases in life expectancy will automatically trigger a rise in the state pension age, which is likely to rise to 70 within 50 years.

Over the past two years, the average retirement age for men has remained at 64.7, although for women it has risen, from 62.6 to 63.1 years.

As life expectancy grows, middle-aged people may no longer be able to rely on inheritance for extra income before they retire. The age at which British adults received an inheritance is rapidly approaching 60, analysis of official data for The Daily Telegraph found. 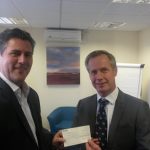