The research, carried out on behalf of Royal London, also showed that an ongoing relationship a financial adviser provides the most benefit.

The Royal London survey stated that around 17 million people in the UK (26% of the population) have received some kind of financial advice at some stage – and that the majority feel positive about their particular adviser, and positive about the services that adviser provides for them.

Of those satisfied people, the most common benefit of their adviser’s services was the access to expertise. That made clients:

The research also showed that:

Customer satisfaction with advisers is even higher where there is an ongoing relationship in place, the survey found. And customers who had been advised and subsequently had ‘protection cover’ in place felt the emotional benefits of the advice more than those people who received ‘general’ advice, and said they felt more prepared for ‘life shocks’.

Indeed, the survey revealed that one in five (20%) people who had protection felt less worried about what will happen to their family after they die compared to one in seven (15%) who were advised generally.

The research also looked at how the 2020 Covid-19 crisis made non-advised customers feel about their finances.

A third of people felt anxious about their financial situation, while 65% admitted to having come to appreciate the value in being more prepared for shocks and surprises in their lives.

Other aspects of the survey revealed: 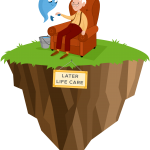