Savers are being urged to seek professional financial advice as reports emerge of a potential rush for cash in the first four months after new pension access rules begin in April.

People are being tipped to withdraw up to £6 billion more than usual from retirement pots, with the new rules giving greater powers to spend or invest money that has been saved up for retirement, but some financial experts say that figure is over-estimated, and believe the cash that will be withdrawn from pots will be much lower.

The national press are also reporting of fears that pension savers ‘newly flush with cash’ will be targeted by fraudsters or unscrupulous advisers, who are already thought to be approaching people with outright scams or unsuitable get-rich-quick investment schemes.

A Channel 4 Dispatches programme that was screened on Tuesday night (January 13) focused on the new pension regulations – and Chris Noon, partner at Hymans Robertson, told the programme that ‘about three times as many people as the government estimated’ would opt to take cash rather than buy annuities.

Explaining the £6 billion figure, Noon split it into three: the usual £10-15 billion of retirement money will be taken out faster than before due to the relative unpopularity of annuities; around 5 per cent of the £100 billion of available money in pension pots will be withdrawn ahead of retirement; and some people in final salary schemes will transfer out to get their hands on savings early.

Channel 4 said that the £6 billion forecast is three times more than the Government’s official estimate of £2 billion.

Research carried out by the Dispatches programme also showed that almost half of over 55s said they intend to take some or all of their money out of their pension – equivalent to 2million people taking advantage of the new reforms nationwide.

But further research by the programme revealed that almost half of people surveyed had been approached in the past nine months by unregulated firms asking if they wanted to review their pension or release some of it as cash – sparking fresh concerns that over 55s are at risk of being duped out of their savings.

Therefore it is vitally important that savers seek proper, professional financial advice on their pension pots, from advisers they trust.

At Lifetime we are here to help you live the life you want to live through our financial management proposition. If you need any assistance over your pension then please get in touch. You can telephone 01226 206800 or email [email protected] 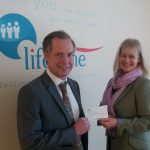