‘Plastic fivers’ to be in circulation come 2016!

‘Plastic fivers’ to be in circulation come 2016!

In just over two years time the Bank of England will start to issue plastic banknotes for the very first time.

The Bank has issued paper banknotes since it was founded way back in 1694, but starting in 1916 there will be a plastic five pound note, featuring Sir Winston Churchill.

A new polymer £10 note, featuring Jane Austen, will then follow in the fiver’s footsteps around a year later, the Bank of England has stated.

The switch to plastic follows a three-year research programme that found polymer notes are cleaner, last approximately 2.5 times longer than their paper counterparts, and are more difficult to counterfeit.

A public consultation, giving people the chance to handle the notes in shopping centres across the UK, showed 87 per cent of 13,000 individuals who responded were in favour of polymer.

The Bank of England feel that a switch from paper to polymer notes, which can survive a spin in the washing machine, could bring savings of 100 million pounds over a decade

The new notes will retain their familiar look, including the portrait of the Queen and historical characters, the Bank added.

Australia was the first country to issue polymer banknotes, back in 1988. 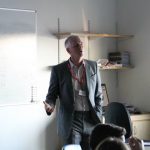