People in their 20s and 30s can either put their lives on hold or accumulate substantial debt, a new poll has indicated.

The Populus poll, commissioned by the ‘Demos think tank’, suggest that young people are overwhelmingly bearing the burden of increasing levels of debt, while the older generation are ‘doing better’ in escaping the squeeze in incomes.

The findings, part of a report into debt by Demos to be published in March, follow a warning by the Institute for Fiscal Studies (IFS) last year of a regression in wealth between the generations, for the first time since the second world war.

The IFS found that people born in the 1960s and 1970s, the immediate post baby boom generation, would be worse off in retirement than their parents.

The Demos study also shows the divide in even more dramatic terms as it starts with the next generation – those born in the 1990s.

The pollsters asked respondents to calculate their debt by assessing their credit cards, outstanding rent and arrears of other bills. They were also asked to add up bank, student and payday loans.

The majority of young people have debts of more than £2,000.

Paying for the basics was the reason given for debt by 27% and 28% respectively.

Jo Salter, who is conducting research on the ‘typology of debt’ for Demos, said the findings in the poll show the need to focus resources on younger generations.

“If, as the Prime Minister tells us, we really are ‘all in it together’ then the government needs to think carefully about not placing additional pressure on people who are just starting out in life, rather than just protecting those who have passed these milestones.” 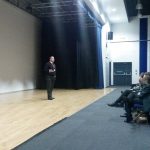 Almost one million long-term absences a year from UK companies