The Oracle of Omaha does it again!

Home / News / The Oracle of Omaha does it again!

The Oracle of Omaha does it again!

The Oracle of Omaha has gone and done it again!

The Oracle is billionaire Warren Buffett and the investing conglomerate he chairs, Berkshire Hathaway, has announced a record profit last year.

The company released its annual report on Saturday and revealed profits soared to $19.5 billion. In 2012, Berkshire Hathaway’s net income was $14.8 billion.

But even the brilliant Buffett wasn’t able to best the stellar returns of the Standard & Poor’s 500 in 2013, which had had returns of about 30% last year.

However, Buffett’s hand-picked equity managers, Todd Combs and Ted Weschler, both beat the S&P 500 in 2013.

“Each now runs a portfolio exceeding $7 billion. They’ve earned it,” said Buffett. “I must again confess that their investments outperformed mine.”

In his annual letter to shareholders, Buffett said that the per-share book value of its class A and class B stock rose by 18.2% in 2013.

Analysts have said that Berkshire’s solid 2013 performance can be credited to improved economic growth – since so many of his holdings are well-known consumer goods and services that do well when the economy is going strong.

Buffett is now 83 and is rightly regarded as a pioneer; one of the most successful and widely followed investors of all time. He has been CEO and chairman of the Omaha, Neb.-based investing conglomerate Berkshire Hathaway for nearly 50 years and has overseen its growth into a $286 billion holding company. 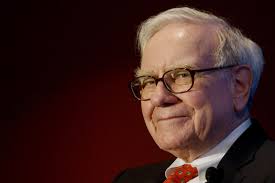 His yearly letter to shareholders has become known not only for explaining his company’s movements in stocks, but also contains wry and often ‘folksy’ observations on investing and corporate America.

“On the operating front, just about everything turned out well for us last year – in certain cases very well,” Buffett wrote.

Buffett did add that ‘during the next decade, you will read a lot of news – bad news – about public pension plans.”

In the shareholder letter, Buffett also addressed the topic of his own demise.

“On my death, Berkshire’s ownership picture will change but not in a disruptive way,” he wrote. “None of my stock will have to be sold to take care of the cash bequests I have made or for taxes. Other assets of mine will take care of these requirements.”

The Buffett family would not be involved in managing the business, he went on, but as large shareholders, “will help in picking and overseeing the managers who do.”

After he dies, he expects his job to be divided, with one person taking the CEO post and running operations and one or more executives handling the investment side of the business.

In the letter Buffett used a quote from his mentor, Columbia University finance professor Ben Graham: “Investment is most intelligent when it is most businesslike.”

And Buffett also discussed two past property investments he had made.

Both investment were made after prices collapsed.

“Income from both the farm and the NYU real estate will probably increase in decades to come,” he said. “Though the gains won’t be dramatic, the two investments will be solid and satisfactory holdings for my lifetime and, subsequently, for my children and grandchildren.

“With my two small investments, I thought only of what the properties would produce and cared not at all about their daily valuations.

“Games are won by players who focus on the playing field – not by those whose eyes are glued to the scoreboard.

“If you can enjoy Saturdays and Sundays without looking at stock prices, give it a try on weekdays.”

In other words, focus on the long run. That is something Buffett has clearly excelled at.