Three-quarters of women fear they will struggle to get by when they reach retirement age.

That is because their current income is too low for a decent pension, a study has suggested.

Research also showed widespread confusion among working age women over the effect of changes to the pension system and the rising retirement age.

The study, carried out by the Pensions Advisory Service, found that almost four in 10 women did not know when they would be able to draw their pension because of changes to the qualifying age – while six in 10 had no idea if they had paid enough National Insurance.

Overall, the research showed that seven in 10 did not feel confident about making decisions when saving for retirement.

Worryingly, 76 per cent do not believe they will have enough income to be financially comfortable once stopping work.

Around 40 million people currently of working age will receive the new single-tier pension, which is due to come into effect in 2016, simplifying the state pension arrangements.

It will run alongside the Government’s landmark plans to automatically enrol people into workplace pensions.

Michelle Cracknell, chief executive of the Pensions Advisory Service said: “The odds of women being able to provide for a comfortable retirement are stacked against them from the start.

“Women are much more likely than men to have career breaks, work part-time and have low-paid service sector jobs.

“The price they pay is an incomplete state pension in their own right and not much, if any, private pension to add to it.” 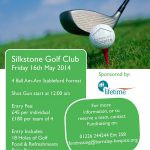 Look out for Oscar at Lifetime-sponsored hospice golf day!