New £1 coin to be introduced – to ‘combat counterfeiting’

Home / News / New £1 coin to be introduced – to ‘combat counterfeiting’

New £1 coin to be introduced – to ‘combat counterfeiting’

Among the announcements made in today’s Budget was the launch of a new £1 coin.

It is set to be introduced into circulation in 2017.

The coin has been designed to combat counterfeiting and is is intended to be the ‘most secure in the world’.

There have been growing concerns that the current £1 coin, which is now 30 years old, is too vulnerable to counterfeiting, with an estimated 45 million forgeries in circulation.

The current £1 coin was introduced in 1983 as part of the phasing out of the one pound note, which was withdrawn five years later.

The Royal Mint, who believes 3% of existing £1 coins are fake, said the move would increase ‘public confidence’ in the UK’s currency and reduce costs for banks and other businesses.

A competition will be held to decide the image on one side of the coin.

Chancellor George Osborne delivered his fifth Budget on Wednesday – and prior to it he had tweeted a picture of the £1 coin next to the Budget Box (see below), with the caption: “Today I will deliver a Budget for a resilient economy – starting with a resilient pound coin.” 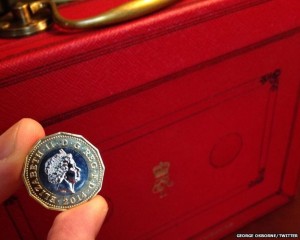 While the Queen’s head will be on the obverse side of the coin, as it is on all legal tender in the UK, the Treasury has said there will be a public competition to decide the image on the other side.

Lifetime among best of Barnsley at Digital Media Centre event