Home / News / Near misses or heroic failures. What’s yours?

So the English weather – so bright and cheerful for most of this summer – turned wet and miserable on Monday.

It almost always rains at some point at Old Trafford – either at the football or cricket grounds – and this week was no different.

The Aussies had England right on the back foot – and had Monday remained dry they would almost certainly have taken the Third Test and blown the series wide open.

As it was, on Tuesday morning the scores on the doors were: England 2, English weather 1, Aussies 0. Sad Aussies relegated to third place. Ashes retained.

The Australians may well look upon the series so far as a ‘heroic failure’ – even though it took England just 14 days to retain the Ashes, the fewest needed at home in the era of five-day Tests.

Although Australia were well beaten in the Second Test, they lost the First by just a smatter of runs, and saw the weather deny them victory in the Third Test.

The near miss or heroic failure has a richer emotional life than, say, a close call.

The near miss can often be accompanied by feelings of frustration, chagrin, disappointment and regret. At times there may be even remorse and despair, that can surface after seeing the ‘desired object’ snatched away forever, after initially been but an arm’s reach away.

But should we distinguish a ‘near miss’ from a ‘mere miss’?

Perhaps we should not brood on the ‘misses’ – near or otherwise – in our lives, or regret the ‘ones that got away’. But, human nature often dictates that we do.

The British have, rightly or wrongly, built a reputation on ‘heroic failures’!

Now, seemingly, it is the turn of the Aussie cricketers……..

There have, of course, been numerous other heroic failures in the theatre of sport, some more fanous than others.

Paula Radcliffe: Before the Briton became one of the greatest female marathon runners of all time, she was better known for glorious defeats. Never was this more apparent than in Sydney in 2000 when, after leading the 10,000m for 24 laps, she was passed by three of her rivals in the final 400m and finished out of the medals.

Dorando Pietri: The Italian runner had the winning line in sight when he reached the stadium in the 1908 marathon in London. But, disorientated and exhausted, he staggered off in the wrong direction. He was redirected, but he kept collapsing and was eventually carried over the finishing line by sympathetic officials. It was all in vain as the unfortunate Pietri was later disqualified for receiving help.

Eric Moussambani: Competing in the 100 metres freestyle in Sydney in 2000, ‘Eric the Eel’ won the hearts of the world as he just about managed to stay afloat to clock the slowest time in Olympic history. The Equatorial Guinea swimmer was the only competitor in his race after both his opponents were disqualified for false starts. He had learnt to swim just eight months earlier and at times could barely keep his head above water but he battled on to earn a hero’s reception and a place in folklore.

Oh…..and the England football team every time they are beaten on penalties in the World Cup or European Championship knock-out stages!

But it is not just in sport where we can have a near miss or heroic failure. It can happen, at any time, in any walk of life.

Half of UK adults are struggling to pay bills, new research reports 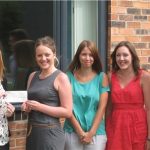 Lifetime referral scheme delivers its biggest cheque yet for hospice