In true Red Nose Day style the nation did themselves proud on what was a spectacular Red Nose Day. Celebrating 25 years of the campaign, the grand total after a top night of TV reached £75,107,851.

Up and down the country, a fundraising frenzy swept the land and saw countless heroic acts of ridiculousness to help raise money for Comic Relief. This included the staff of Lifetime!

As you can see from the picture below over 30 of the team dug out their shirts, jumpers, shoes and ties to bring a splash of colour to a very grey Friday.

Whilst Ian and Robert hogged the limelight early on in the day (see previous post), Ken Abbott (mortgage adviser) later stole the show as he walked into the office wearing normal clothes much to the disappointment of many of the team. When asked what he had done to support the fundraiser his face went redder than the red pants he had to prove he was wearing!

This little bit of fun helped the team raise £91 for the charity. Well done guys and everyone else who did something funny for money. Fab total so far, and well done to the British public for supporting this most worthwhile of charities. At times like this it makes you proud to be British. 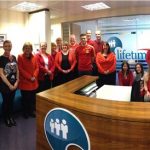 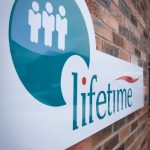 One of South Yorkshire’s best kept secrets? We think so!