Lifetime mum so proud after son’s award-winning passing out parade!

Lifetime mum so proud after son’s award-winning passing out parade!

Lifetimer Tracy Ward was a ‘very proud mum’ – after watching her son Alexi enjoy an award-winning Royal Navy passing out parade in Plymouth.

Alexi (pictured below) picked up the Reservist Prize for Endeavour, awarded by Captain R Fancy OBE ADC MSc, Commanding Officer of HMS Raleigh – as well as his Royal Navy epaulettes in Roebuck Theatre before his final passing out parade last Friday. 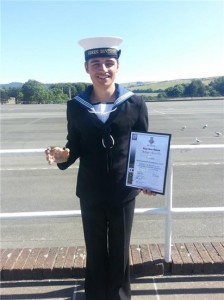 Tracy, Lifetime’s General Insurance Manager, said: “I recently asked Alexi if he felt that he had made the right choice as far as pursuing a career with the Royal Navy is concerned. In reply he told me that he considered there to be no greater honour or privilege than to serve his country.”

Alexi attended Sheffield Sea Cadets for six years – and achieved the highest rate of Petty Officer Cadet – before becoming staff in November 2012 at the age of 18.

He is currently an Acting Petty Officer serving at Sheffield Sea Cadets.

“He finished his A2s in June 2013 and is now anxiously awaiting his results with the intention of undertaking an International Relations Degree at Lincoln University and going on to pursue a career in the Royal Navy as a Warfare Officer.

“In the meantime, with a view to gaining experience and understanding, Alexi joined the Royal Naval Reserves. He attended his first RNR parade night at Ceres Division, Leeds in January of this year and began his Phase 1 training.

“Having completed and passed the two pre-requisite courses, he then attended a two-week residential course at HMS Raleigh, Torpoint, to complete his Phase 1 Training.”

Although one of the younger members of the team, his performance and personal development during training led to him being awarded the Reservist Prize for Endeavour.

In the closing paragraph of his appraisal report, Lieutenant W Smith, Reserves Training Officer, summarised: “[Alexi] has the potential to progress well in the RNR and I would encourage him to consider his options, as I believe with the correct training he will make a good officer and see no reason that papers should not be raised at the earliest opportunity.”

This view was also expressed by Captain Fancy during a private audience with Alexi when the prize was awarded to him.

Added mum Tracy: “I am so unbelievably proud of my son and his achievements. With the energy and enthusiasm he puts into both Cadets and the RNR I am confident that he will go on to achieve great things and I wish him every success in his future endeavours.” 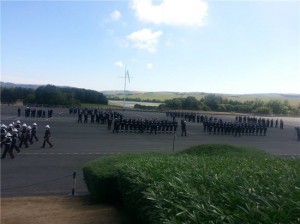 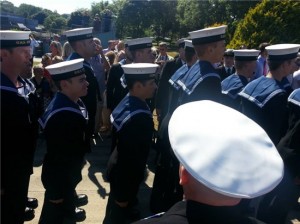 That summer break can often help us ‘rediscover our mojo’

Children continue to miss out on benefits of tax-free savings