One of Lifetime’s valued clients has received a long service award from the Football Association.

The long service awards are highly valued and handed out only for individuals who have given at least 50 years service to the ‘beautiful game’ – and especially if it is a ‘love affair’ with local football.

One such gentleman is Bob Armitage.

Lifetime client Bob (pictured below, centre of picture, alongside Sheffield and Hallamshire County FA Chairman Brian Jones and Stuart Topham) is still playing football in the Wragg League……at the age of 73! 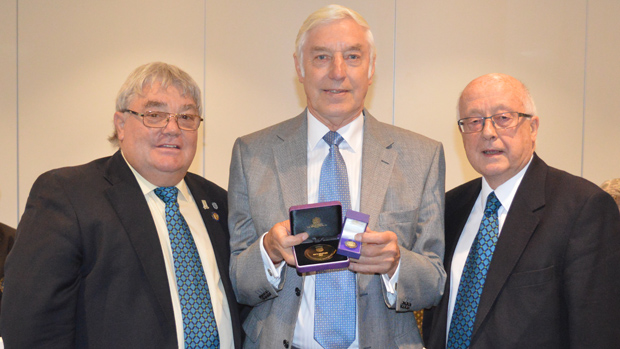 From the age of 17 Bob has played for a good number of teams in the following Sheffield and Hallamshire Leagues:

In 1969 he took over the secretary’s job at English Steel – and duly took charge of four football teams who played in the Hatchard League, the County Senior League, Works Premier and The Haig League! Oh…..and he still found time to keep on playing himself!

In 1973 Bob moved to Fir Vale as assistant secretary and treasurer, where there were two teams playing in the Sheffield & District League and Anglo Scandia League.

Then in 1979 he answered the call to help Acheson Juniors. Over the years he has looked after their under 10s,11s,12s and 13s as a manager/secretary and treasurer. Sterling service!

He was still turning out for the Real Princess football team as well, before.

In1989 he was asked to be a Real Princess player as well as the secretary/treasurer and kit man!

Bob then moved on to Real Arundel, then Ecclesfield White Bear, before finally pitching up at Ecclesfield Real Vets.

His nomination for the FA’s long service award was put forward by Stuart Topham who told the Sheffield and Hallamshire FA website: “Bob has never stopped playing except for a while back in 1984 when he had a disc problem which cut back his appearances.”

What you need to know at retirement