How do you do when it comes to the national recommended exercise targets?

Home / News / How do you do when it comes to the national recommended exercise targets?

How do you do when it comes to the national recommended exercise targets?

After reading an article on exercise I was horrified. It stated that almost one in 10 adults have not walked continuously for five minutes in the past four weeks, painting an alarming picture of a country where “there are very high levels of physical inactivity”.

However as I read on and discovered what the national targets were for exercise I began to feel less super fit and more couch potato after realising that I haven’t been near a gym or leisure centre in over a year!…How do you do when it comes to the national recommended targets?

The study carried out by the Centre for Market and Public Organisation at Bristol University, found that nearly 80% of the population fails to hit key national government targets – performing moderate exercise for 30 minutes at least 12 times a month. It found that just over 8% of adults who could walk had not (with the exception of shopping) walked continuously for five minutes within the previous four weeks, while 46% had not walked for leisure for 30 minutes continuously over the same period. Almost nine out of 10 had not swum and a similar proportion had not used a gym. 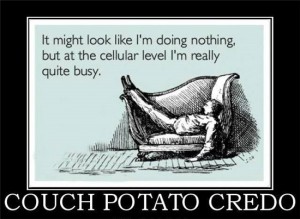 Several studies have suggested that the UK is one of the least physically active nations in Europe. According to one study, in which subjects were equipped with accelerometers, only 6% of men and 4% of women met the Department of Health’s recommended levels for activity.