Home / Community News / Grass is still green – but the Triffids are nowhere to be seen!

Spring has sprung – and that delightful splash of warm sunshine that has lit up these last few days has led to the keen gardeners among us to get out there and ‘spruce up’.

As the new local cricket season got into swing on the back of lovely weekend weather, so the smell of freshly-cut grass wafted up into the air of our green and pleasant land.

This time of the year is always seen as one of renewal – where new growth emerges. Not only is the world of finance – but also the gardening world too.

Social Media Manager Andrew Lodge is quite possibly the least green-fingered person here at Lifetime, but as the Sunday sunshine enveloped South Yorkshire even he roused himself to tackle the rockery and window boxes at home!

For Lifetime Communications Director Bill Bottomley, however, the chance to get into the garden after the winter weeks and months is a rejuvenating, fulfilling moment.

And while he admitted to being a ‘bit shattered’ after his gardening exploits, he was pleasantly surprised to find that his lawn had not turned into a jungle.

Bill (pictured below) explained: “Cutting the grass has always been a cathartic experience for me.

“The solitude (there’s never a child in sight when the lawn-mower makes an appearance), the opportunity for uninterrupted thought, the physicality of the process, the smell associated with long lost English summers that seem to have abandoned these shores and finally the satisfaction of having a neat and tidy garden for at least a couple of weeks. Heaven!

“Of course, the exception to this joyous experience is the dreaded first cut of spring! This is nothing short of physical and mental torture as the process takes over the meditative state because you have to do everything twice!

“The grass has grown to Triffid-like heights and one expects to find long lost balls, various garden implements and even children among the tangled mesh that takes two cuts to uncover the lawn. 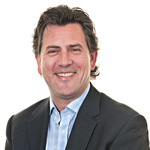 “The spaces have to be taken out of the mower to allow for maximum height on the first cut which can only take place after a thorough search of the undergrowth for the above said items (and of course, having a dog…..) and then the whole exercise is repeated with the spaces returned in order to make it look like you’ve actually done something (with the cries of “haven’t you finished yet” from one who has never cut a blade in anger in her life!).

“But lo and behold, not so this year!

“It seems that there is an advantage to Britain entering an Ice Age! No requirement for space removing, no missing children, no tedious repetition and only the odd bit of ‘you know what’ (going back to the dog), clearly visible and easily removable.

“Joy of joys, the first cut was indeed deep enough and short enough in 2013 because the grass just hasn’t grown.

“My father-in-law observed this phenomenon and from the sidelines, well the path if truth be told, he confirmed that this was not simply a grass-related incident, but that his tomato plants, started at the same time every year on the windowsills of his kitchen just before Christmas, were eight inches shorter than the previous year!

“No sun, means no growth, I was told with the authority of 60 years as a gardener.

“I wonder if no sun for 18 months means we are going to get a cracking summer, because I’d be happy to do two first cuts if we get some sun!”

Don’t know where to turn for financial advice? Well….