Home / News / Coding set to sit alongside reading, writing and mathematics in curriculum

From September 2014, coding will be part of the primary and secondary education curriculum in the UK, as part of wider changes designed to boost computer literacy alongside reading, writing and maths skills for British children.

And gaming, animation and other technology is certainly hitting a chord with today’s youth.

There was a lot of interest from the students – and afterwards Liz (pictured below) found herself surrounded by half a dozen youngsters eager to learn more about animation and making games. 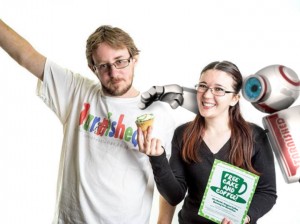 Lifetime were the ones to launch the ‘BBIS’ project – and we have been delighted by the results so far.

And we were especially thrilled that Liz contacted us a few days after her talk to say that she has been asked aboutb the possibility of running a workshop for students.

Coding and animation are just another career path that is opening up for the youth of today.

For all their virtual accomplishments, gamers aren’t often feted for their real-world usefulness. But that perception might be about to change, thanks to a new wave of games that let players with little or no scientific knowledge tackle some of science’s biggest problems.

And gamers are already proving their worth.

In 2011, people playing Foldit, an online puzzle game about protein folding, resolved the structure of an enzyme that causes an Aids-like disease in monkeys. Scientific researchers had been working on the problem for 13 years. The gamers solved it in three weeks!

A year later, people playing an astronomy game called Planet Hunters found a curious planet with four stars in its system, and to date, they’ve discovered 40 planets that could potentially support life, all of which had been previously missed by professional astronomers.