Chancellor of the Exchequer George Osborne is being tipped to further relax pension rules in his Budget on Wednesday –  to allow the sale of annuity contracts.

Osborne is expected to announce measures which will allow up to five million pensioners to sell their annuity contracts in exchange for cash lump sums.

Osborne said: “There are five million pensioners who are locked into annuities they have already bought. They should have the same freedoms as we have given everyone else.

“For most people, sticking with that annuity is the right thing to do. But there will be some who would welcome being able to draw on that money as they choose – the same freedom we are offering those approaching retirement in April this year.

“So I am going to change the law to let that happen, and make sure we have the right guidance in place.

“People who have worked hard and saved hard all their lives should be trusted with their own pension.”

The government said currently people wanting to sell their annuity income to a willing buyer face a 55% tax charge, or up to 70% in some cases.

However, in an announcement on Sunday, the government said it would remove this charge, so people are taxed only at their marginal rate.

The government also said the Financial Conduct Authority would be asked to introduce guidance and consumer protection measures to prevent mis-selling. 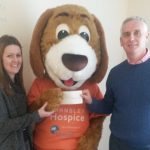