“My background is in theatre, having trained as an actress and then going on to work with children and young people through youth theatre, drama education projects and also directly with looked after young people on performance projects.

“I came to work in Barnsley in 2004 as a Community Arts Officer and progressed over the following eight years to being Head of Culture for BMBC before leaving earlier this year to work for Barnsley Civic Enterprise Trust Ltd to run The Civic.

“I feel I could talk to students about careers in the arts and creative industries, working as a freelance performer/practitioner, working for local government, women in leadership roles.

“I am only in my early 30s and have progressed very quickly through my career so I think I could also talk about my personal journey, the challenges that presented being young and female in male-dominated environments, and also starting from a non-academic family background in a highly competitive field.

“I am happy to speak to students in an Assembly or in a classroom setting.

“I would also be interested in mentoring a student if this was something you had considered. I met one of Horizon’s wider team at the BBIS launch event, Mr Kelly, who spoke to me about the Learning Support Centre and work with students within there and he mentioned that mentoring may also be an area that develops so thought I would register my interest.” 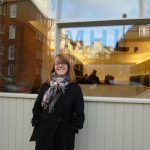