Budding Barnsley ace George Nicholson, who is being supported by Lifetime as he aims to become a sporting star, joined fellow young golfers from around the world to compete in the 2013 U.S. Kids Golf European Championships.

Approximately 550 players, ranging from ages 5-18, from 35 nations competed in Europe’s premier junior golf tournament to showcase the next generation of stars.

Last year Reece Els, the 11-year-old nephew of Open Champion Ernie Els, had kicked off his own international career at the competition.

The courses were modified for each age group in order to provide the same level challenge, meaning holes were progressively shorter as the age groups got younger. That ultimately allowed the budding golfers to reach the greens in the same number of strokes as tour professionals.

George, aged 12, turned in a very creditable performance and his proud dad, Andy Nicholson, who is the managing director of Barnsley company Doyle Consultants, tweeted: “Fantastic experience with George at European Champs in Gullane, Scotland…Learning how to play links golf! Learned loads, met some really nice kids from all over the world.. A real pleasure.

“George was grouped with young golfers from Australia, Hungary, USA and well as the UK – and all were a pleasure to play with. There were some very good golfers and George knows how much he needs to improve to be able to compete with the best.”

Andy sent the pictures below, the first of which shows George (right) on the first tee alongside Justin from New York (centre) and last year’s winner Josh from Canberra, Australia (left), who stands at 6ft 2in at just 13 years of age! Andy quipped: “And yes, he hits it miles!”

The second picture shows one of the steep bunkers on the Gullane course, where you need steps to get down into it! 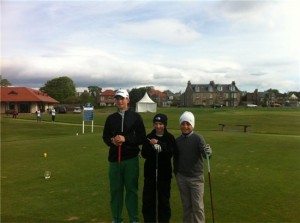 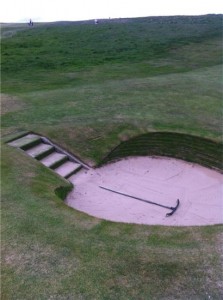 Also last year Reece Els, the 11-year-old nephew of Open Champion Ernie Els, kicked off his own international career at the competition.

Dan Van Horn, President and founder of U.S. Kids Golf, said: “We are delighted that the European Championship has developed into one of the must-attend events in the junior golf calendar.”

George has linked up with Lifetime after being impressed with the company’s ethics and professionalism, qualities the young man and his father are delighted to be associated with.

The youngster has won over 60 competitions both locally and nationally – and is coached at the Pete Cowan Golf Academy, where he comes into contact with world class golfers such as Lee Westwood, Thomas Bjorn, Louis Oosthuizen and Henrik Stenson.

He is also a member of the Nike academy Elite Squad at Oulton Hall.

George is now preparing for a mouth-watering trip to the United States, where he will play in a world junior competition at the prestigious Pinehurst course in North Carolina.

Distracted by the sun?