Annuity Rate risk is another risk which should be considered when deciding when and how to take your pension income. Annuity rates over the last 10 to 15 years have fallen considerably down 5.18% in March 2013, and then recovering slightly up 5.66% as at August 2014. 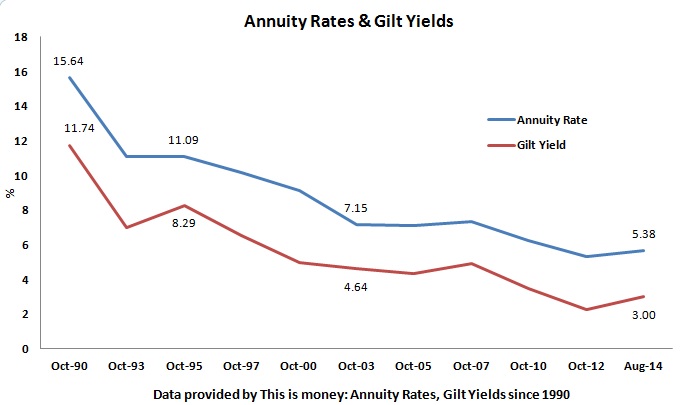 Annuity rates are closely linked to 15 Year Gilt Yields, and the prevailing annuity rate at the time will determine broadly, amongst other factors, how much income you will get from the Annuity.

This is not to say that you should wait for rates to increase before you take your benefits, rates could rise in the future but it may be some time before they do, and waiting means missing out on income which you could otherwise be enjoying.

Below shows the annual income that could be bought with a £50,000 pension fund after tax free cash and with some built in benefits.

The above figures are based on a 65 year old living in South Yorkshire with an initial pension fund value of £66,667 and an annuity purchase price of £50,000 after taking tax free cash of £16,667. The figures are generated as at 6th August 2014 and in-line with prevailing Annuity Rates of the time.

The main benefit of Annuities is the security of knowing what income you’ll be receiving for the rest of your life. The table above shows how you can have dependent benefits built in to the annuity to look after your loved ones after you have died.

Selecting an escalating annuity can help combat inflation in later life, but the annuity would offer a much lower starting income than a level annuity. You might then take the view that opting for a Level annuity would be better as you’d rather have more income in the early years of your retirement whilst you’re fit and healthy and therefore more active.

There is more to Annuities than just Level and Escalating, please see our ‘Annuities Explained’ section for more information.