He’s always loved his job as our Bill, but it appears that he’s revelling in a new part of Lifetime’s development!

Bill takes up the story:

“On January 1st 2013 I embarked on a fascinating journey into the unknown world, and, to me, the very scary world of social media! Over the past nine months I have come to see it’s value to our business and now believe that without it, we would struggle to meet our ambitious targets and would be left behind as more and more of our clients will not only be familiar with social media, but will not be interested in engaging with a company that isn’t.

“I also didn’t realise how much fun we would have!”

Bill attended last Friday’s ConnectedBiz event at The Civic in Barnsley and was impressed by the speakers on show.

“I went to this event because there were four speakers who have, in different ways, embraced digital technology and have used it to their advantage, and to the advantage of their clients/customers.

“Each had a very different story to tell; each had a strong opinion on the subject; and each was very successful in their field.”

Said Bill: “What a story this company has. Quite simply their use of Facebook and Twitter helped secure Yorkshire the Tour de France despite being overwhelming underdogs at the start of the process and despite being up against some of the most glamorous locations in Europe.

“Their battle to convince the judges that Yorkshire was the only place to choose was fought not in the fields of Agincourt but on the pages of Facebook and the massive Twitter campaigns that showed the enormous support for their bid!

“The WY team realised very quickly the power to show the best bits of our county, the countryside, the people, the quirkiness and the humour through the pages and interaction of FB and Twitter, but more than that the enormous potential marketing power and reach of these mediums.

“Their message and campaign was being reached by millions across the Eurozone – quicker than the fastest French train, oh, and it was free!

“The campaign, the website and their social media tools have won plaudits and awards from all sectors but most importantly they have succeeded in achieving their lofty goals and continue to excite the world about Yorkshire.”

Reported Bill: “John does not use social media. His company are involved in the Games industry, based in Barnsley and New York! Anyone who has kids or who has grown up into adulthood over the past decade cannot fail to have been influenced in some way by this industry. Today my son picks up the new FIFA game, it’s all he and his friends have talked about for the past month!

“John has a passion for his work, or his way of life as he describes it, but he also has a passion for spotting the talent in our youth and insists that if we are to compete in this ever expanding market, our education system needs to adapt…..as do our businesses.”

Said Bill: “The future looks a bit scary to me having listened to Ms Solon! Robots reacting to robots that can anticipate our every need, by constantly monitoring our internet searches and providing helpful suggestions for our future browsing or buying.

“We can see it happening with Google, Facebook and Amazon, and this will only get more sophisticated in the future where we start to question our own decisions in the face of the suggested robot line!

“There’s some very interesting technology from a company called WIBBITZ that can change the written word into a sound track with images, again driven by those scary robots!

Bill enthused: “I was particularly interested in listening to this gentleman, the chief executive and co-founder of ‘As Seen On Line’, the biggest on-line retailer in the universe!

ASOS have their distribution centre in Barnsley, all one million square feet of clothes! They are the largest retailer in Australia, and they have no shops. They have turned the retail industry on it’s head through their use of the internet and have certainly pointed the way to our future shopping habits.

“There was so much to learn from all the speakers, but, from what I heard, we are on the right track here at Lifetime……” 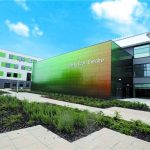